Once the authorities have a clear go-signal to hike Mt. Agung, book a sunrise trip with a local operator. You won’t regret it.

Overall, the hike is moderate to difficult, but when you overcome the challenging uphills and the slippery rock slopes, the rewarding views would be with you for life.

What to bring when hiking Mt. Agung in Bali?

You don’t need to bring much. Packing light is essential, but the following items should be with you at all times during the hike.

You need hiking boots or trailrunners with a traction that’s intended for tropical terrains. You’ll be walking on mud (when raining) and some loose soil, and crushed volcanic rocks near the summit.

We wore our Salomon Speedcross 3, which was just okay for the job.

During our Mt. Agung hike, we decided to wear shorts. Looking back, it wasn’t a good idea. Hiking pants keep you protected from the elements.

There are steep parts of the trail that require you to grab on to something (e.g., branch or rope when available). Protect your hands from the cold and from sharp objects.

It will be very cold at the summit. Downs are not ideal based on experience. We should’ve worn a hardshell jacket intead.

You’ll be sweating as you battle with the cold. A quick-dry shirt dries much faster, yet it’s highly breathable to keep you dry and cool at the same time.

Your tour operator is most likely to give you breakfast and lunch, but you’d want something to eat along the way. Get some protein bars, chocolate, and a bottle of water.

It’s best not to rely on your pants’ or jacket’s pockets.

Instead, get a small backpack/daypack for your wallet, ID, and smartphone. Wrap these essentials in plastic in case it rains.

It can be remembered that back in October 12th, 2002, Bali was the victim of a terrorist attack leaving more than two hundred people – locals and foreigners – dead.

To remember the casualties, a monument was created. Today, the Ground Zero Memorial (image above, taken on November 18, 2016) serves as a reminder to everyone that terror and hate have no place in this world.

When in Bali, take your time to visit this top landmark.

What are the top-reviewed, affordable hotels near Ground Zero Memorial Bali? Here’s a list.

Located along the same street where the Memorial is located, along Jalan Raya Legian, The Spot Hotel boasts one of the best prices for a 3-star property within the Kuta-Legian area of Bali.

Does it have a swimming pool? Yes, it does. The pool is at the rooftop, giving you an overlooking view of surrounding houses/establishments. 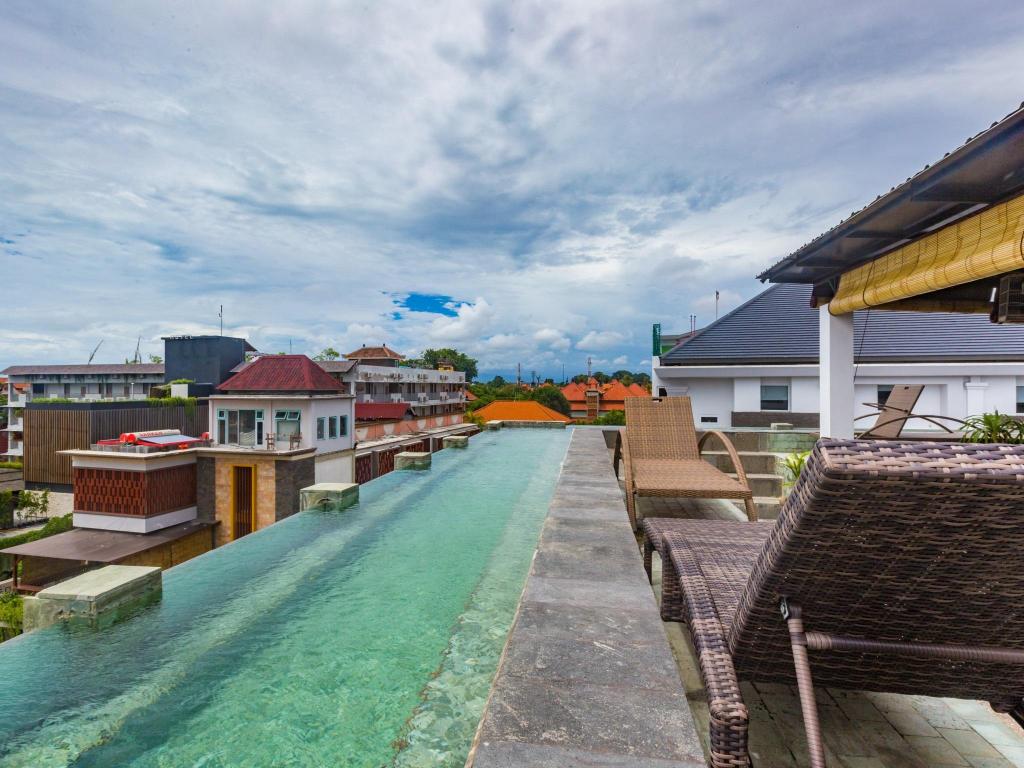 The Kubu Hotel is only 440 meters from the beach. But aside from that it has a well-maintained outdoor swimming pool and a mini garden.

Ronta Bungalows has been given an overall rating of “very good.” To borrow the words of one guest, this budget hotel is “so cheap for something so central.” If you’re looking for a well-located hotel, then consider Ronta Bungalows. 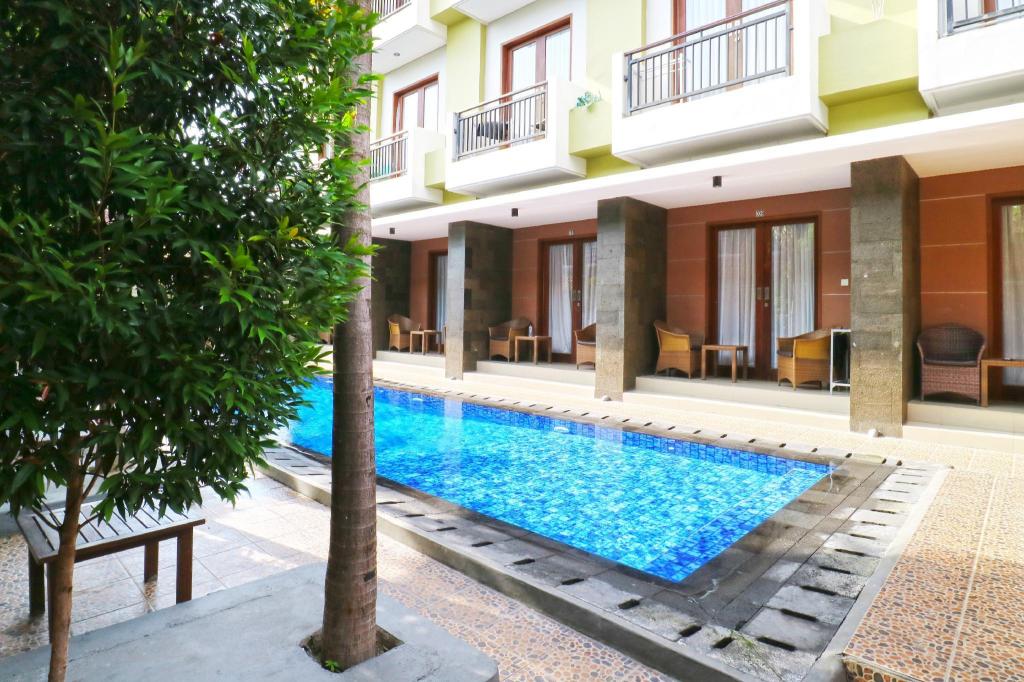 Restu Bali Hotel has bunk beds that have separate curtains for privacy, which is a must when sharing a room with other travelers especially at night. Located in the heart of Bali, this hotel is 600 meters to the beach. 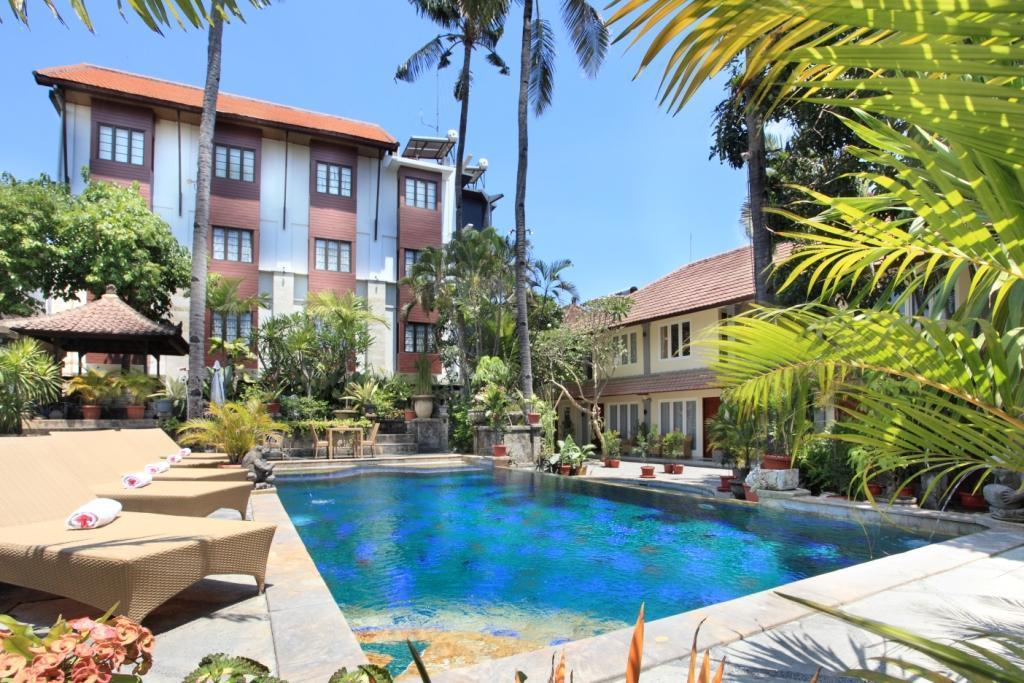 You’ll love the balcony/terrace that you’ll get when you book a room with Paradiso Beach Inn Bali. When you’re not lounging by the pool, or swimming at the beach, you might want to have some me-time at the balcony.

Going around Bali? Use the Kura-Kura Bus! 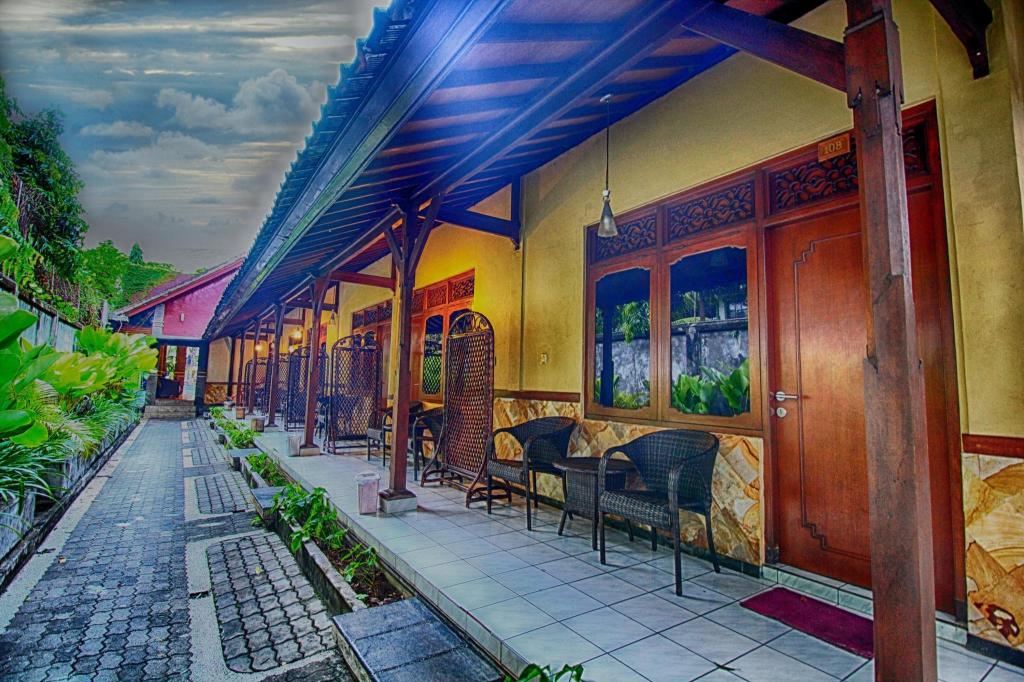 As advertised, Fourteen Roses Legian Hotel is newly renovated. That said, expect that the following amenities – outdoor swimming pool, garden, spa, and restaurant – have also been revamped and improved.

Only 580 meters to the beach, Bendesa Accommodation is described as a “no-frills lodging with a pool and a bar.” 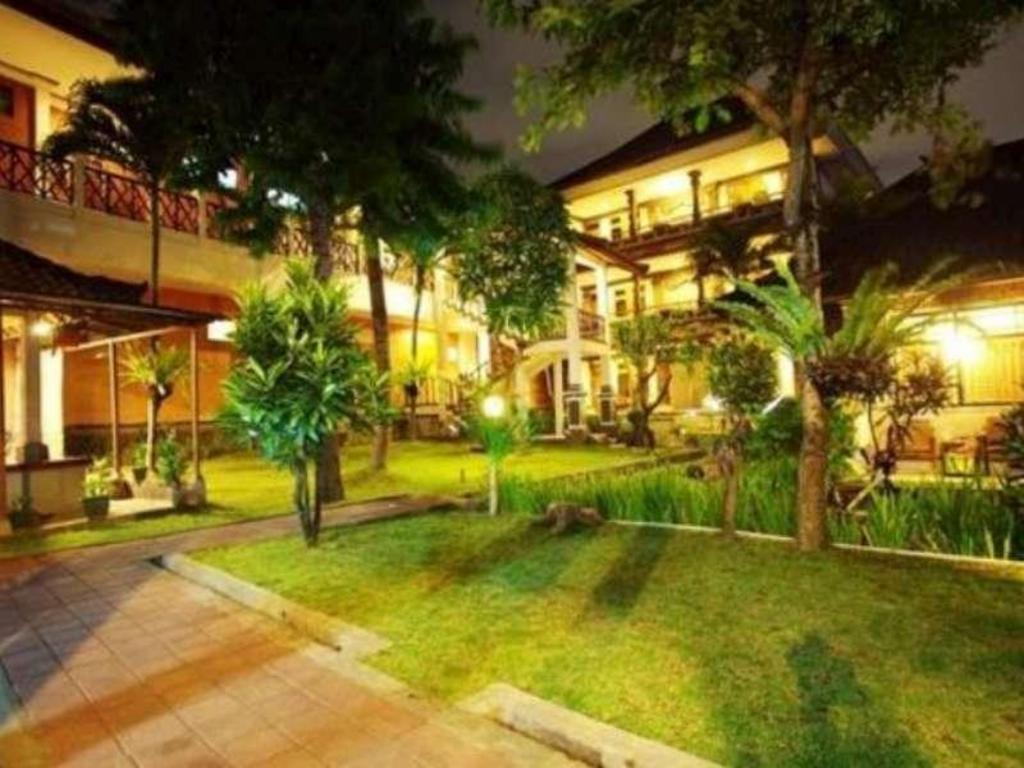 Bali has three popular adjacent areas: Kuta, Legian, and Seminyak. They’re within minutes away from each other, and each has its own distinct “personality.”

Read more about their differences here.

If you’re into clubs and restos, then Kuta’s partyholic vibe will definitely appeal to you. You’ll never run out of places to eat, hang out, or party. Plus, going from one place to the other is fast and convenient with the Kura-Kura bus.

Where We Stayed in Kuta: Matahari Kuta Bali Review

After our Mt. Agung hike, we went straight to Kuta and spent one night at the Matahari Guest House, which is located about 500 meters from the city center. The Matahari Department Store is nearby, and so is Kuta Shopping Street.

Kuta Beach is 390 meters away.

Is this the best place to stay when in Kuta, Bali?

Although the landmarks and attractions are within walking distance from the Guest House, the heat of the sun will make you wish you stayed at somewhere closer. If you hate walking, then this is not the place for you. Fortunately, there are many good alternatives.

On a positive note, rooms are quite affordable, and the room we stayed in was relatively clean. If you’re looking for a quiet place that’s quite near the center, then this is the place for you.

Going around Southeast Asia? Don’t forget to download and install these ride-sharing apps! 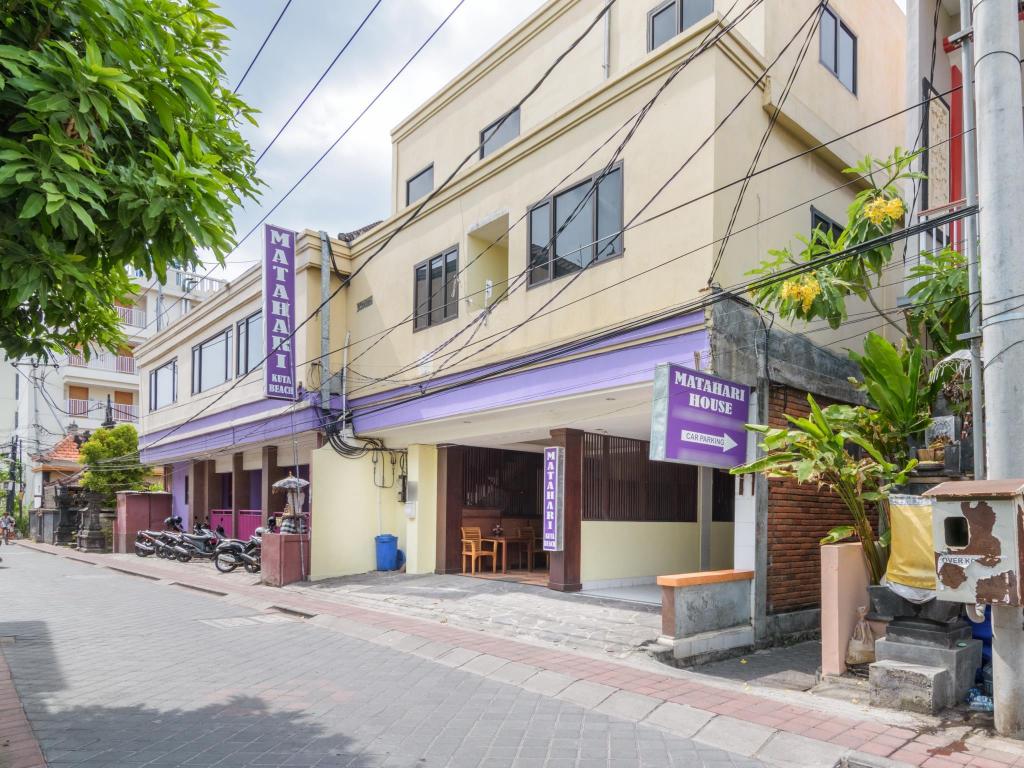 What’s the best area to stay in Kuta?

We say anywhere near Kuta Beach. When you’re not spending some time at the beach, you’d want to hang out at a cool resto or party at a club at night. You’d want everything to be within walking distance, but you don’t want a lot of walking to drain your energy especially during the day.

Here are some of the top-reviewed budget hotels near Kuta Beach.

One of the coolest features of the H-Ostel Bali is its facade. It’s made of reclaimed wooden windows and doors, giving the hostel a rustic look. Inside, the black walls are decorated with mostly white grafitti.

H-Ostel Bali is part of our list of “9 Cozy Accommodations in Bali, Indonesia.” Check out additional hotel options… 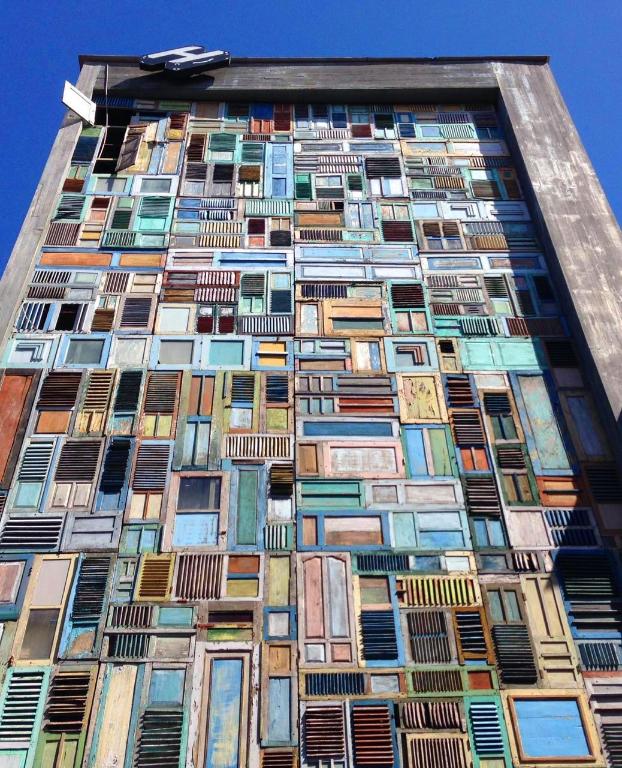 Waringin Home Stay is one of the few budget hotels near Kuta Beach with a pool. If your Bali holiday is mostly about swimming, then this hotel is worth checking out. 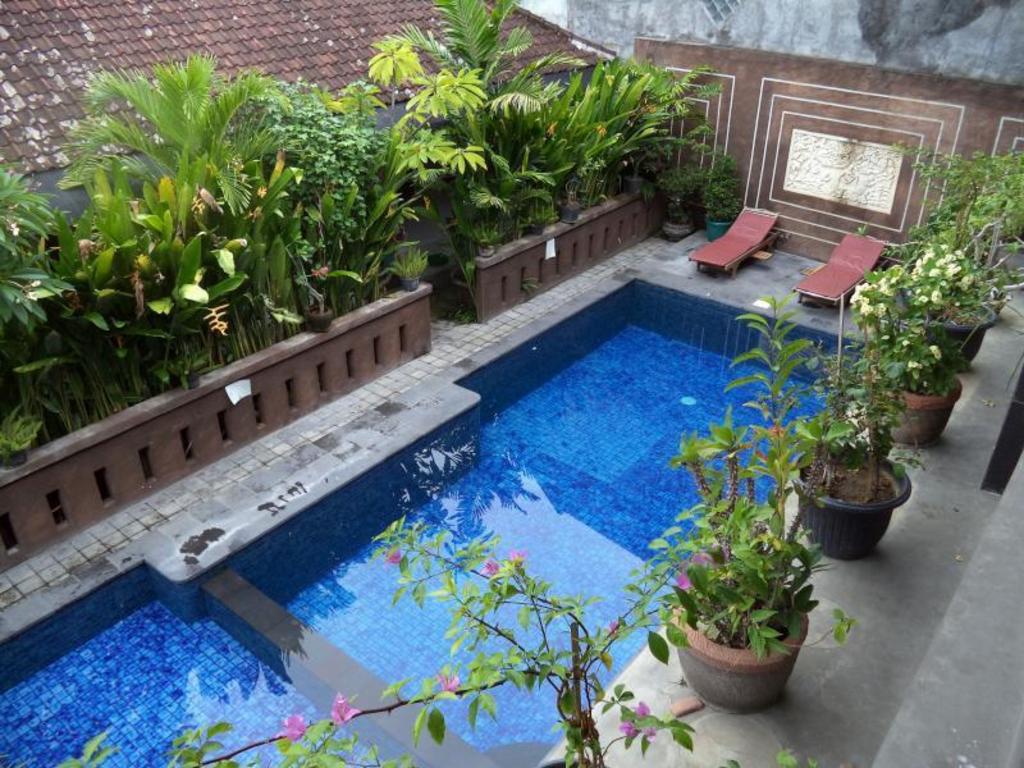 Located along Jl. Popies Lane 1, Suji Bungalow features a garden/yard and a swimming pool, making it a group-friendly place during your stay in Bali. Kuta Beach is 350 meters away. 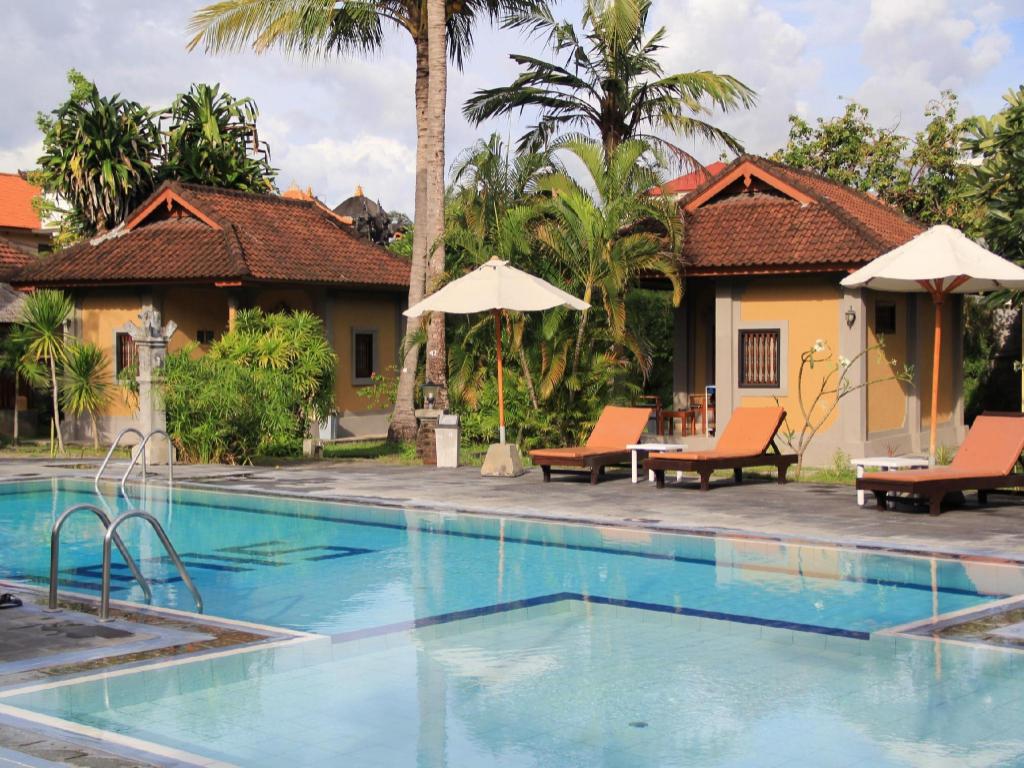 Jukung Villas Kuta has been given an “exceptional” rating by previous guests. It has consistently received high marks on cleanliness, service, facilities, and location. It’s 370 meters from Kuta Beach. 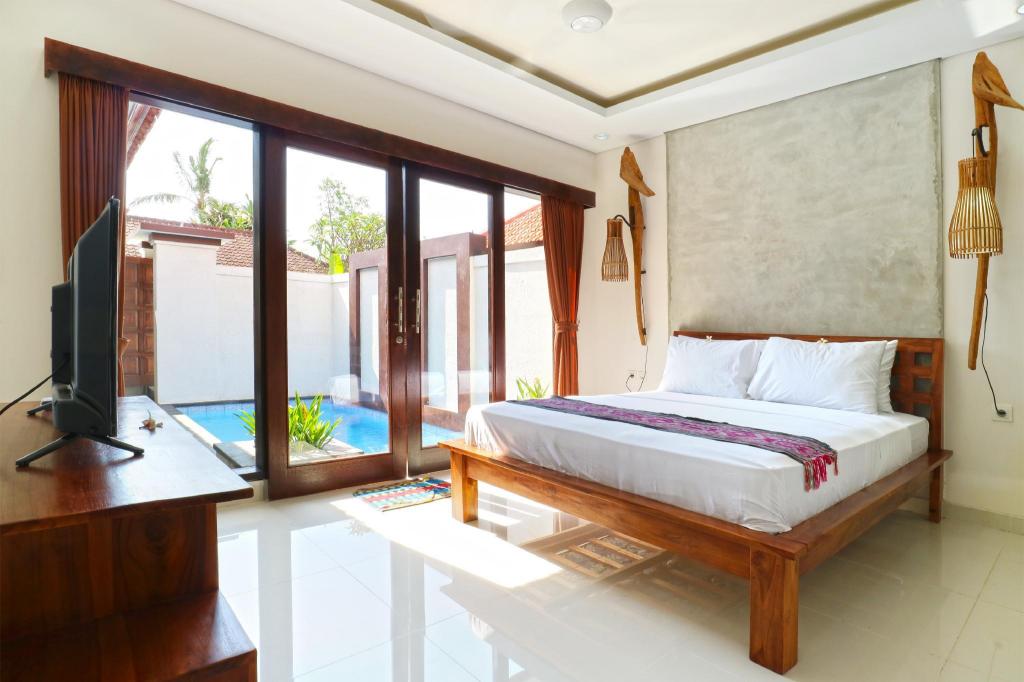 If you want a more homey vibe when in Bali, then Hana Kuta Beach Hotel has got you covered. Note that it comes with its own swimming pool, and it’s 560 meters from the beach. 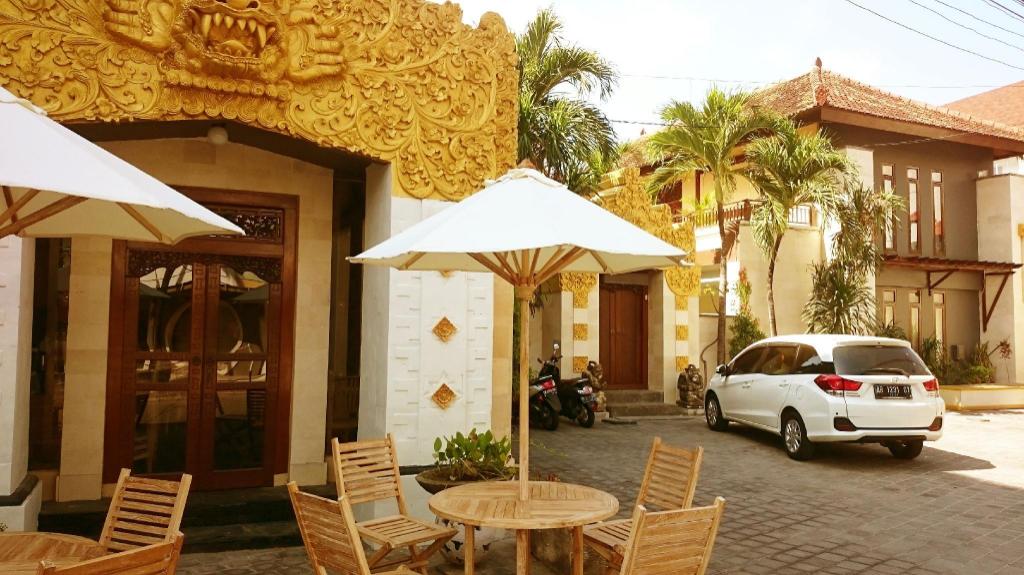 At the peak of Mt. Agung, we were able to feel like we were on top of the world. There was nothing higher than you except Mt. Rinjani, which is situated at a safe distance.

We remember clouds upon clouds that blanketed the whole of Bali, Indonesia. We remember the cold, which we ignored because it was perfection on top. We remember looking down feeling silly trying to figure out which of those miniature houses was our guesthouse.

Image below: A portion of the hiking trail

Online, about three weeks before our Bali trip, we booked a hike thru a local operator called Bali Sunrise Trekking and Tours. At the time, it had the best offer for solo hikers – affordable rate, free breakfast and lunch, two-way transportation, and a guide.

Our journey started at 10 PM at Nick’s Homestay in Ubud where we were picked up by the agency’s driver.

The hike would start at Besakih Temple. According to the driver, it would take about 2 hours to reach the temple from Ubud.

At midnight, we reached what it appeared as a registration area where about 6 men were waiting. We were asked to write down our personal details on a notebook. The driver then introduced us to our guide who said his name was Gede.

Based on research, Besakih Temple is the most important and largest Hindu temple in Bali. We were hoping to get a glimpse of the complex before we set off, but it was pitch-black we only managed to see stone blocks that wouldn’t make sense as a temple if we didn’t know that they were part of one.

It was chilly when we started walking at about 1 in the morning, but we had all our Mt. Agung essentials with us, so we felt confident.

Like most of our previous hikes, the Agung trail started off mostly flat before giving us some challenging uphills. It was quite difficult, but to get through, we maintained a slow-but-steady pace.

At 4AM, we reached a rest area where Gede made a bonfire to keep us warm and gave us salak (snake fruit). From this point up to the summit, the climb would mostly be an inclined slope. Crushed volcanic rocks would also add to the difficulty.

We kept the bonfire for an hour, watching the supermoon hover over us. Later, we were joined by a group of French girls who stopped by for some chat.

As we made our way to the top, the skies started to change colors, and the surroundings became more and more visible. Before we knew it, we were looking down at the most beautiful sea of clouds we have ever seen. It was a hundred times better than what we witnessed during our Mt. Kinabalu climb.

Mt. Agung is not one of the tallest mountains in Southeast Asia, but at that time, it felt like it was one of them.

At the top, we drank some lukewarm tea while enjoying the views.

Image below: At the peak of Mt. Agung, Mt. Rinjani is in the background

Image below: Crater of Mt. Agung

About a year since our hike, there have been eruptions and earthquakes caused by Mt. Agung. As of this writing, the latest eruption/activity happened on June 13, 2019 at 1:38 Bali time. Tour operators have stopped offering hiking trips.