Google data reveal that Aeon Mall‘s busiest hours are from 6PM to 8PM. Said to be Phnom Penh’s most popular shopping center, this mall is home to many stores, restaurants, a food court, and a cinema. When visiting Phnom Penh, you might want to drop by and see why people typically spend up to 2.5 hours here.

Since the mall is in a high-end neighborhood, there are several upscale hotels near the property. Here, we give you a list of some of the cheapest we can find.

From the Grand Elevation Hotel, Aeon Mall is just a few minutes walk. It’s also not far from other top attractions such as the Independence Monument and Naga World. 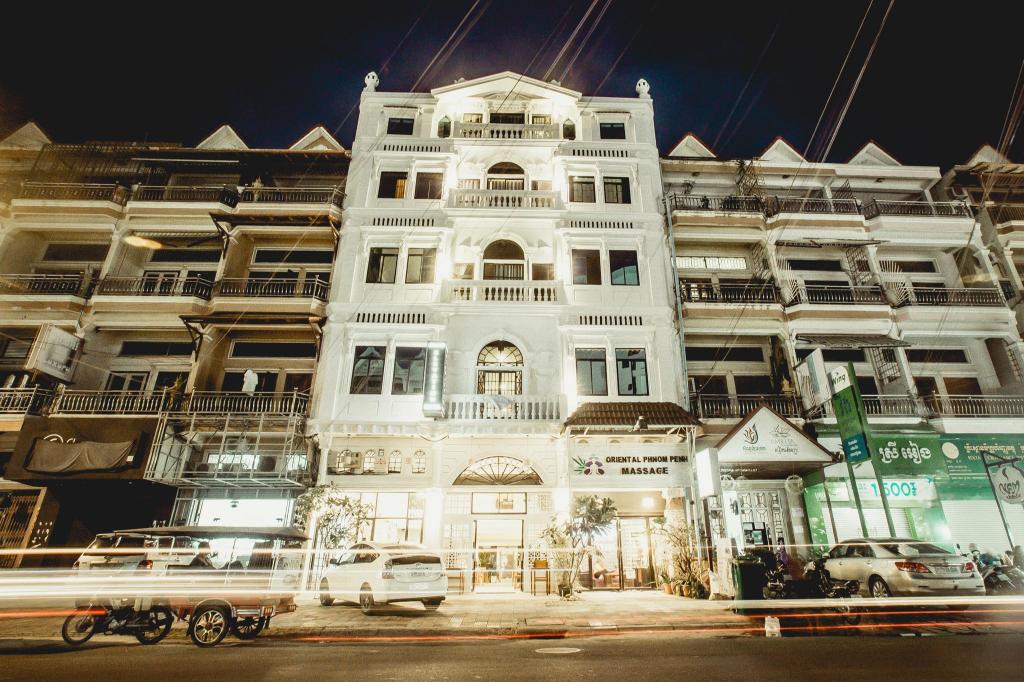 One of the unique selling points of YK Art House is its location. A hotel in Phnom Penh near Aeon mall, not only is it near top landmarks in the city, but it’s also “tucked away from the busy main roads” according to a previous guest. Inside the hotel is a pool that you can hangout in.

Overall, Corner9 Bassac Boutique Hotel has been given an “excellent” rating by previous guests. Service and cleanliness stood out as the main reasons for this rating. The room was “spotlessly clean,” says one person from China. 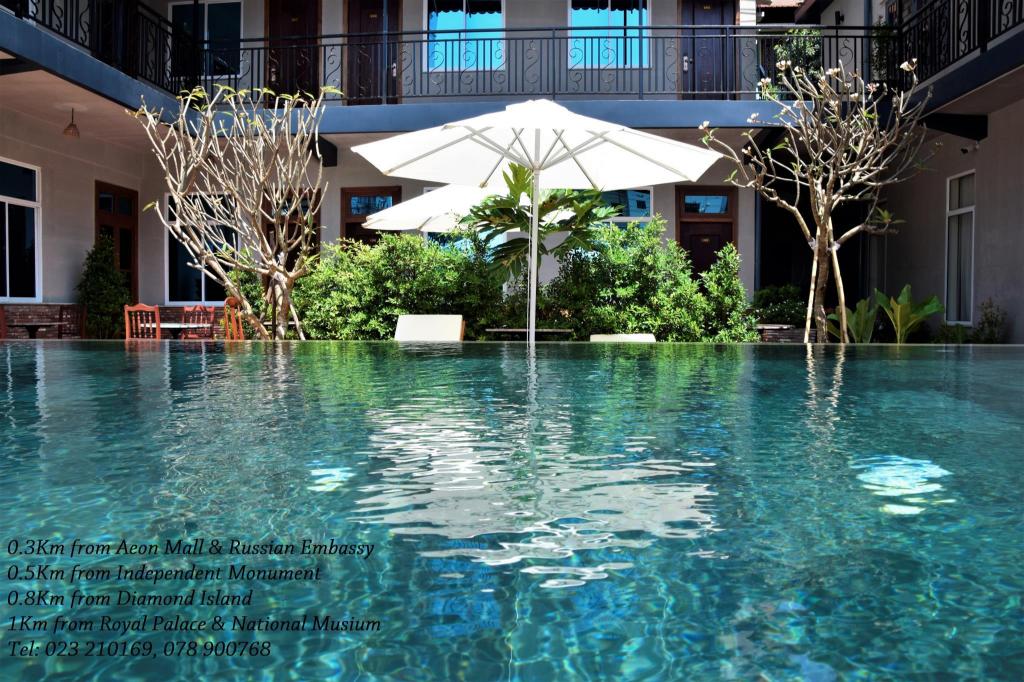 Villa Samnang is about 1km away from top attractions in the city such as the Royal Palace, Silver Pagoda, and National Museum. The Independence Monument is only 350 meters away. 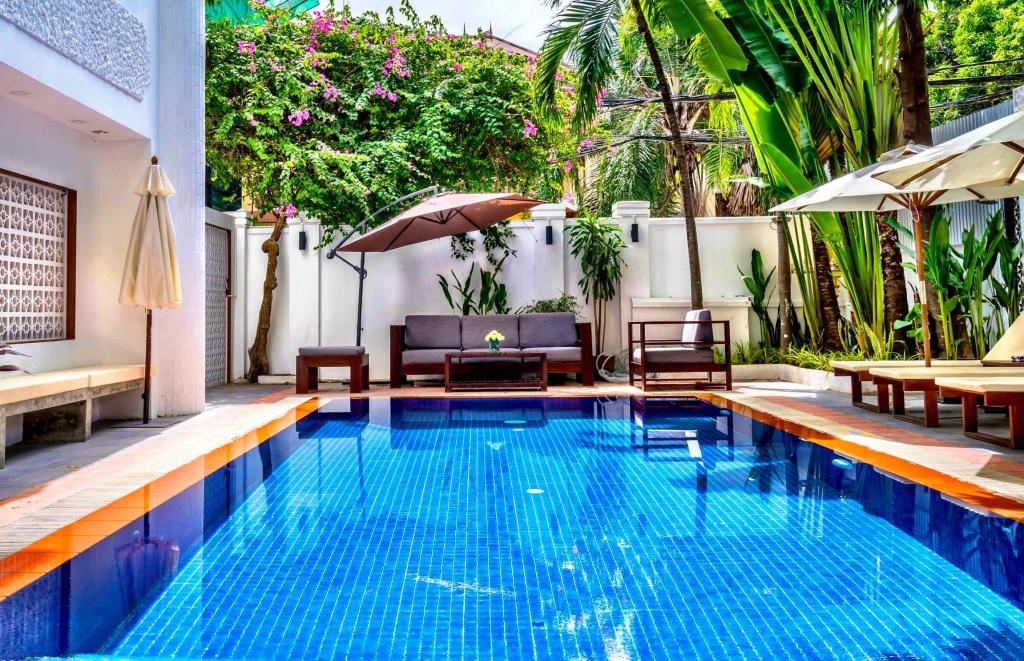 If there’s something that previous guests appreciate about House Boutique Eco Hotel, it’s how welcoming and helpful the staff of this hotel are. For instance, a couple arrived very early for check-in, but the hotel managed to get their room ready 4 hours before check-in time. 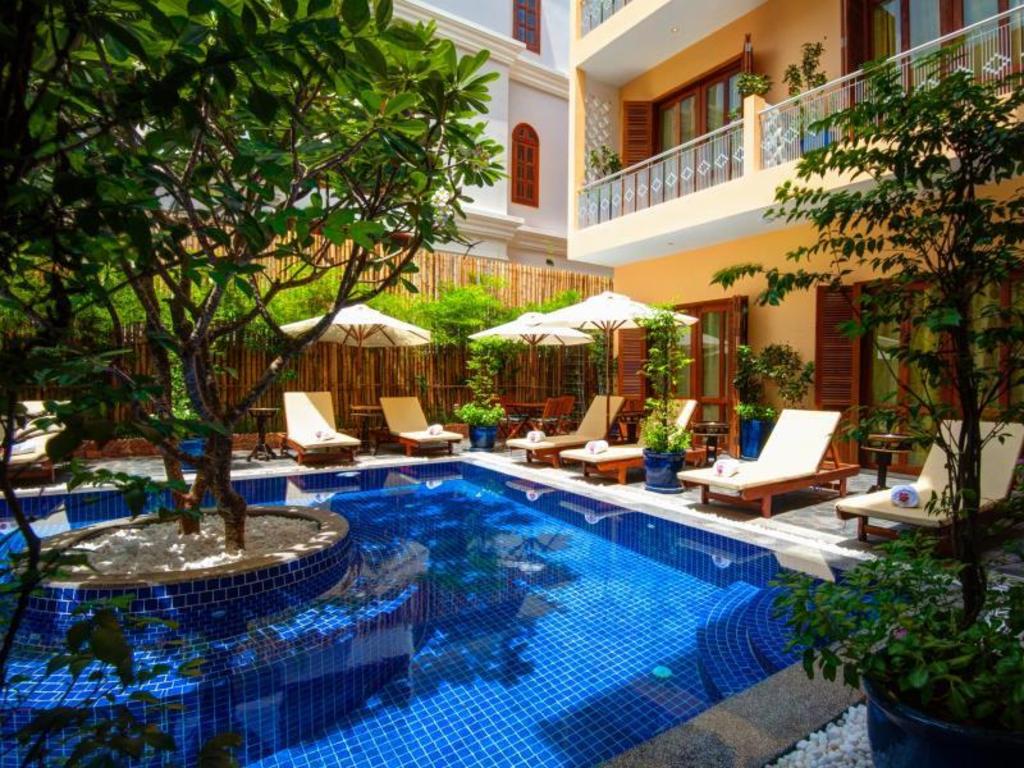 One of the newly built hotels in the area, De Ninth Boutique Hotel and Spa has an attractive interior decor, which previous guests love. It also features a swimming pool, which is what you need on a hot day in Phnom Penh. 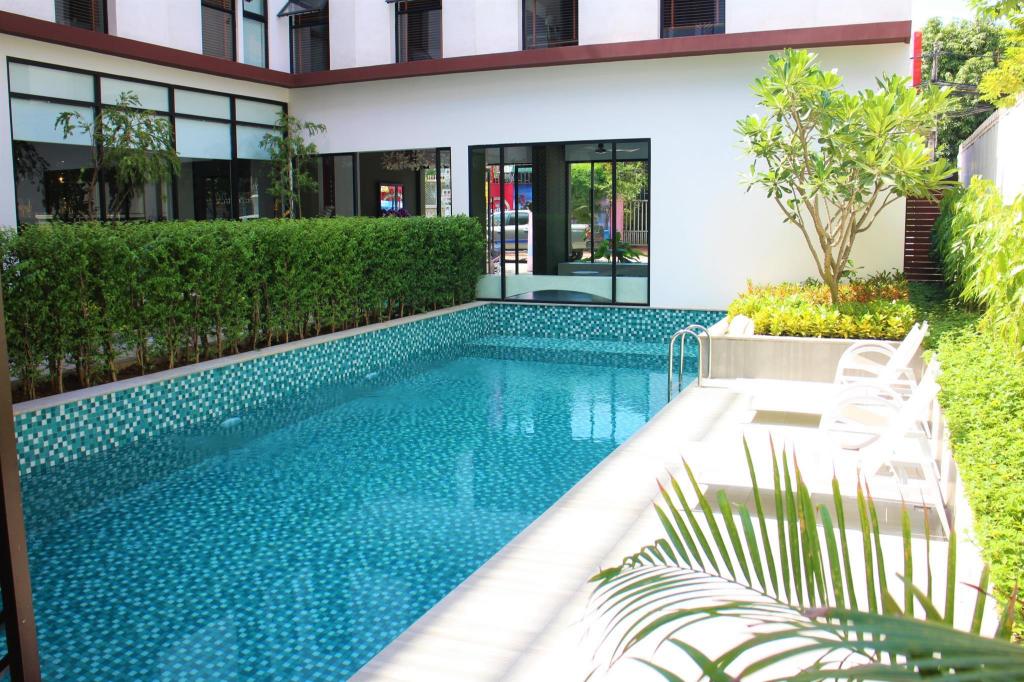 Sure, there are plenty of hotels near Pub Street – boutique hotels even – but we stick to Bou Savy.

In this Bou Savy Guest House review, we enumerate the reasons why we love this hotel, and why we think you should stay here during your trip in Siem Reap, Cambodia.

Bou Savy is advertised as a bed-and-breakfast, but it doesn’t feel like one.

First, you get a free ride from and to the airport. Simply make a request. Two, their free breakfast doesn’t feel “free,” if that makes sense, which is the opposite of what was given to us at a B&B in Mandalay, Myanmar. Plus, according to a couple, they were given free dinner because they stayed at Bou Savy for 4 nights.

Third, the hotel also offers tours and bus tickets in case you need them. You don’t have to go through the hassle of booking with an operator. Fourth, the rooms are spacious, and they come with a free supply of water and towels.

Fifth, the staff are friendly and very accommodating.

It has an outdoor pool!

The pool is perfect after a long day at the Angkor Archaeological Park, or from hiking Phnom Kulen. Be warned, though. Bou Savy has a family-friendly vibe, so we don’t think loud pool parties are allowed.

It’s not that far from Pub Street.

The hotel is about 1.14 km from Pub Street, making it the ideal place to stay if you want a peaceful ambience. Still, it’s not too far in case you change your mind and get some drink in one of the bars along Pub Street.

It takes one 7-minute tuk-tuk ride from Bou Savy to Siem Reap’s most famous street. Just brush up on your haggling skills because some drivers can be dishonest.

Pub Street, aside from the majestic Angkor Wat and Kulen Mountain, is one of the most popular attractions in Siem Reap, Cambodia. The street itself is littered with bars and street stalls selling local delicacies and exotic food. The surrounding area is a place for shopping, dining, and sightseeing.

Within the Pub Street area, there are different types of accommodations to choose from. Depending on your budget – low, mid, upscale – you can find a hotel that suits your needs.

Are you into boutiques? Here, we give you a list of top-reviewed boutique hotels in Siem Reap near Pub Street.

On this list, Phally’s Residence is the closest accommodation near Pub Street. It’s located only 60 meters away.

This boutique hotel has a cozy interior, which gives you a homey ambience the moment you walk in — quite the opposite once you’re outside the hotel. 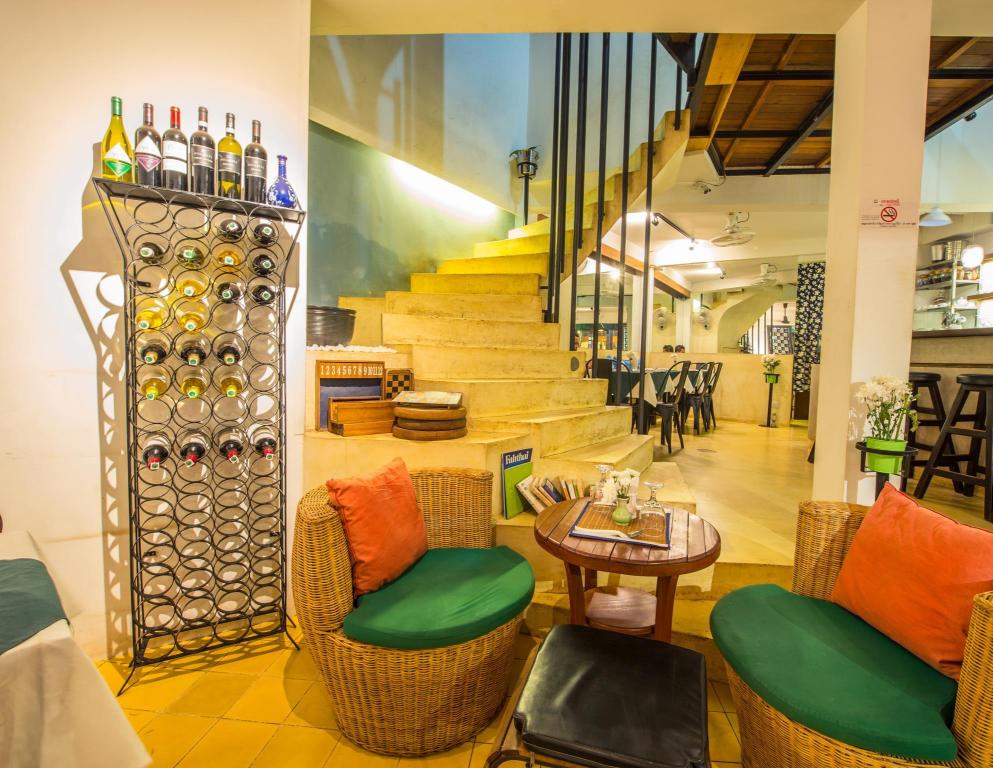 When budget-traveling across Southeast Asia, it’s always a breath of fresh air to find something like the Twizt Lifestyle Hostel – or something that does not look “budget” or “you get what you pay for” kind of hostel.

Beyond Yangon has an interesting name. And equally, it is an interesting place. The interiors are filled with statues, furniture, and crafts that display the craftmanship of the country.

Speaking of Yangon, check out these Yangon hotels in case you’re also going to Myanmar soon. 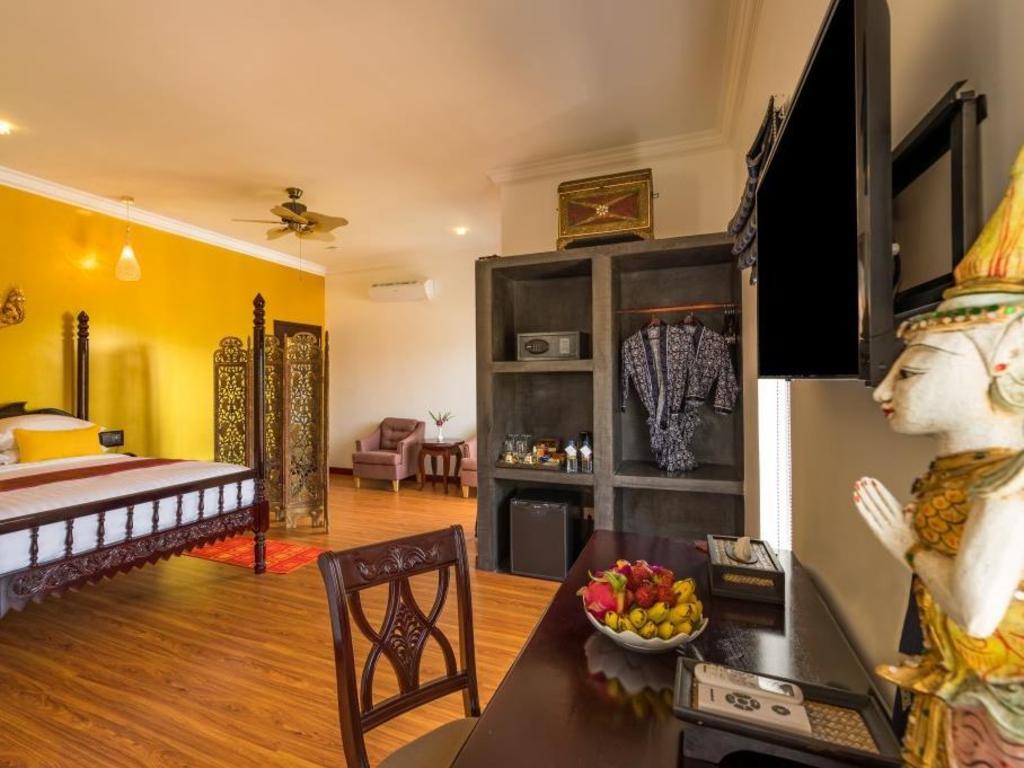 Kanak Garden‘s unique selling point is its garden vibe, which seems to be a rare offer in Siem Reap. This top-rated boutique hotel in Siem Reap near Pub Street reminds us of one of these cozy hotels in Bali. 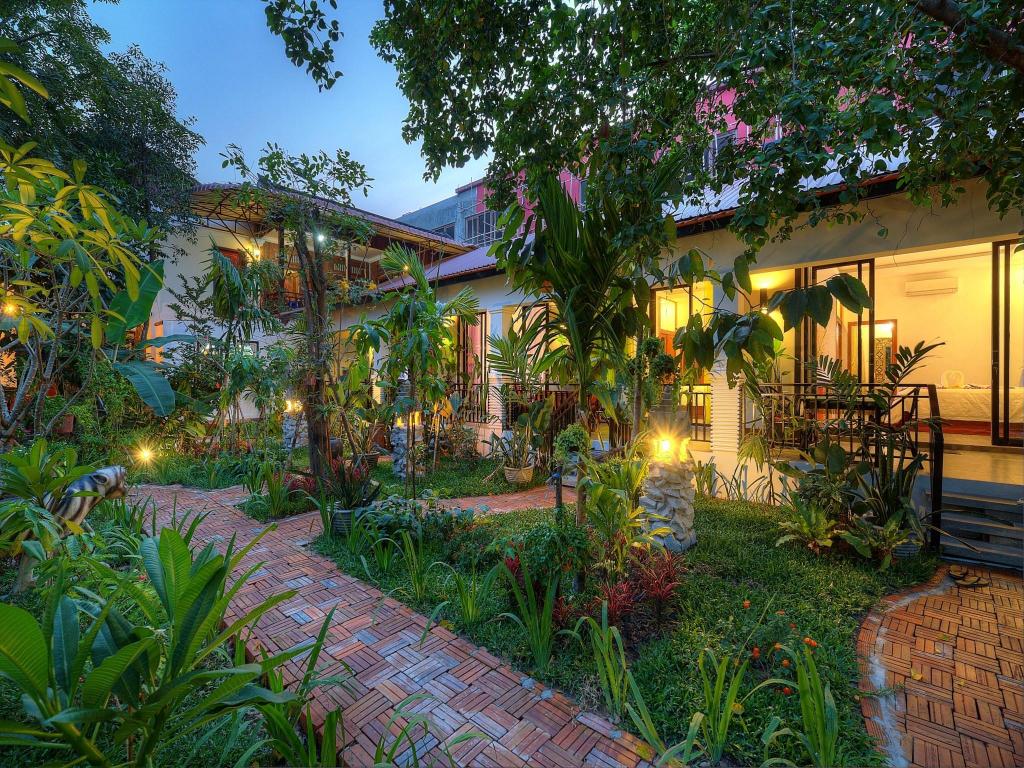 The Oops Hotel is also very near Pub Street, which is just 110 meters away. Take a look at the cool, fun, and fresh furniture pieces. 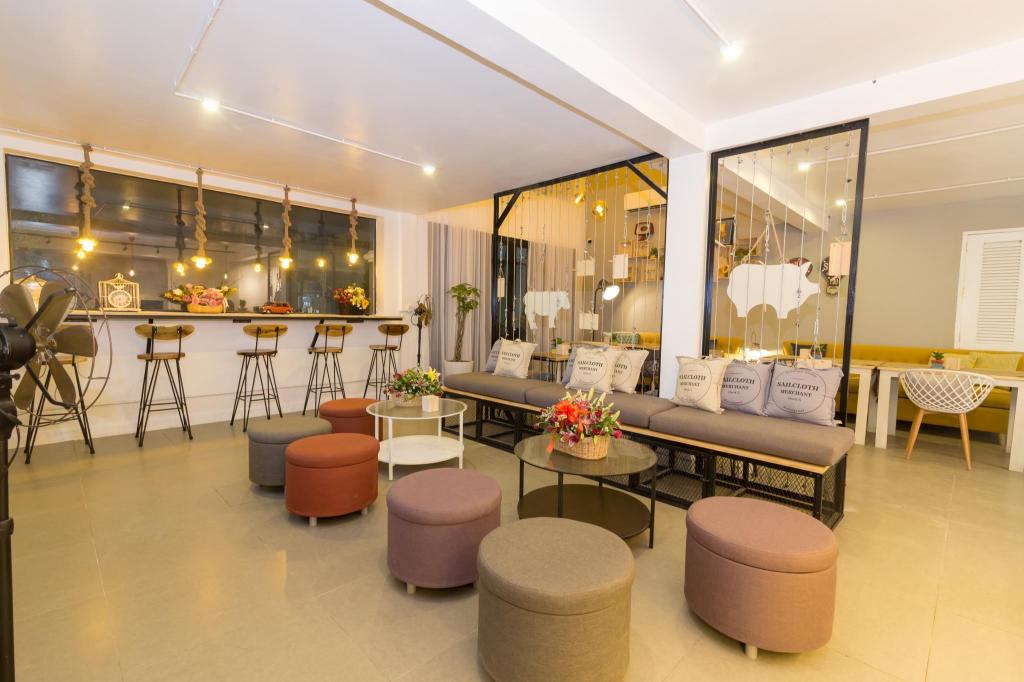 In one of the bars along Pub Street, Angelina Jolie was seen sipping cocktail during her time filming Tomb Raider. Today, The Red Piano is one of the most visited in Siem Reap‘s famous street.

During the day, the street and its surrounding areas look dry and “sleepy.” But when the night falls, they become alive with blaring music, curious tourists, and vendors selling exotic food.

As a famous tourist destination, the Pub Street area is home to budget and mid-range hotels. Here are the top-reviewed.

Located 290 meters away from Pub Street, Travellerhome Angkor is a 3-storey property with rooms that offer a “picturesque city view” of Siem Reap. It has been given an “excellent” rating by previous guests with location and service gaining top marks. 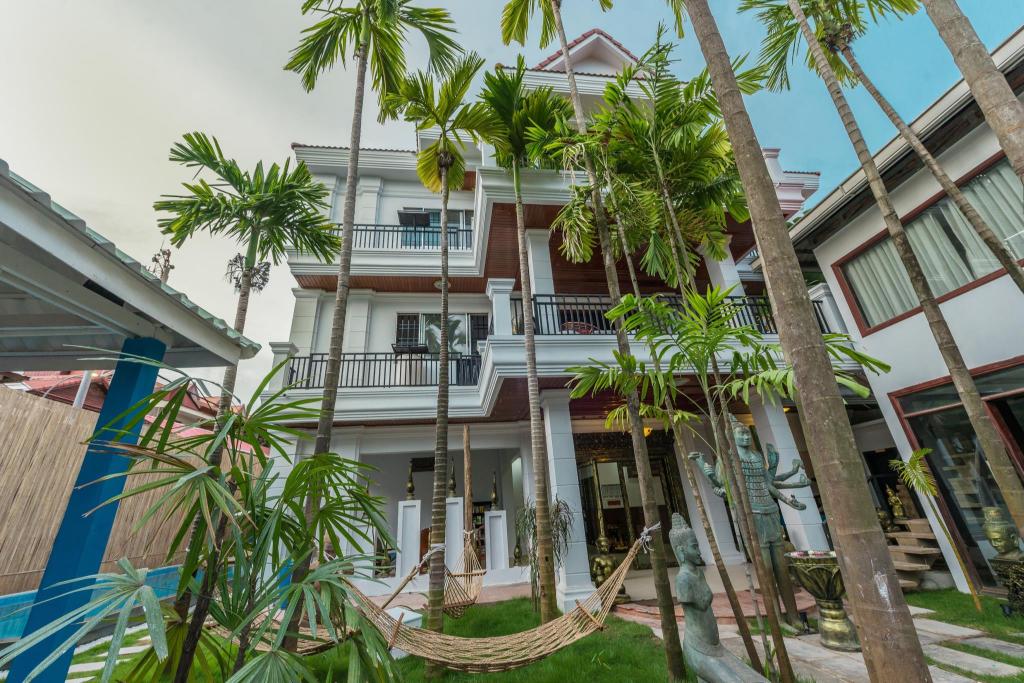 The Villa Sok San Square is also a cheap hotel near Pub Street Siem Reap, located only 240 meters away. This distance is enough to give you an enjoyable walk towards the town’s popular street without tiring you out. 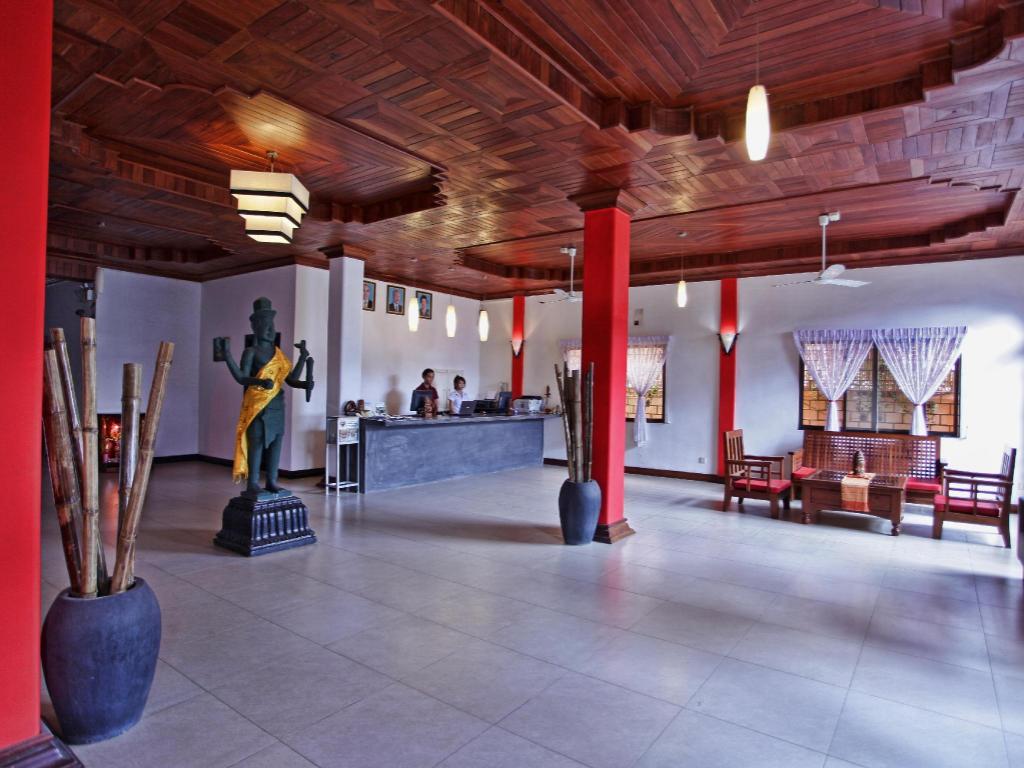 Cheathaka Angkor Hotel is one of the most in-demand hotels in Siem Reap not only because of its proximity to Pub Street but also because of its amenities. It has a swimming pool at the rooftop, giving you the perfect hangout after a visit to the Angkor Archaeological Park or a day hike to Phnom Kulen. 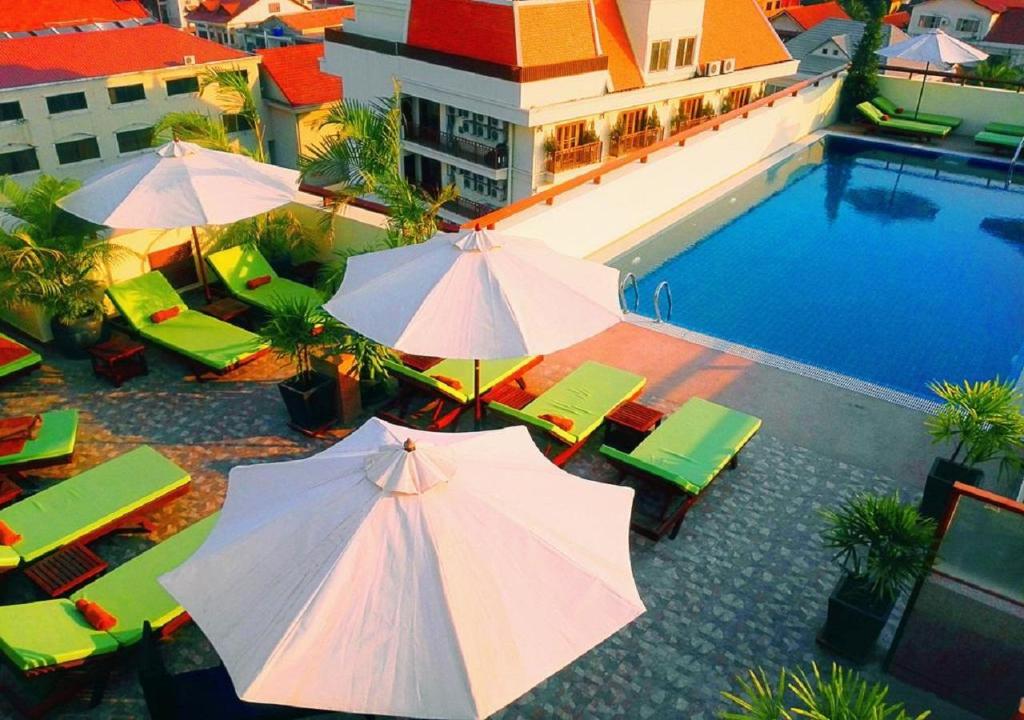 Newly renovated, Onederz Hotel Siem Reap offers different accommodation options for different types of travelers. If you’re a solo traveler, there’s a bunk bed at a dorm room for you. If you’re traveling with a family, there’s a room that meets your needs. 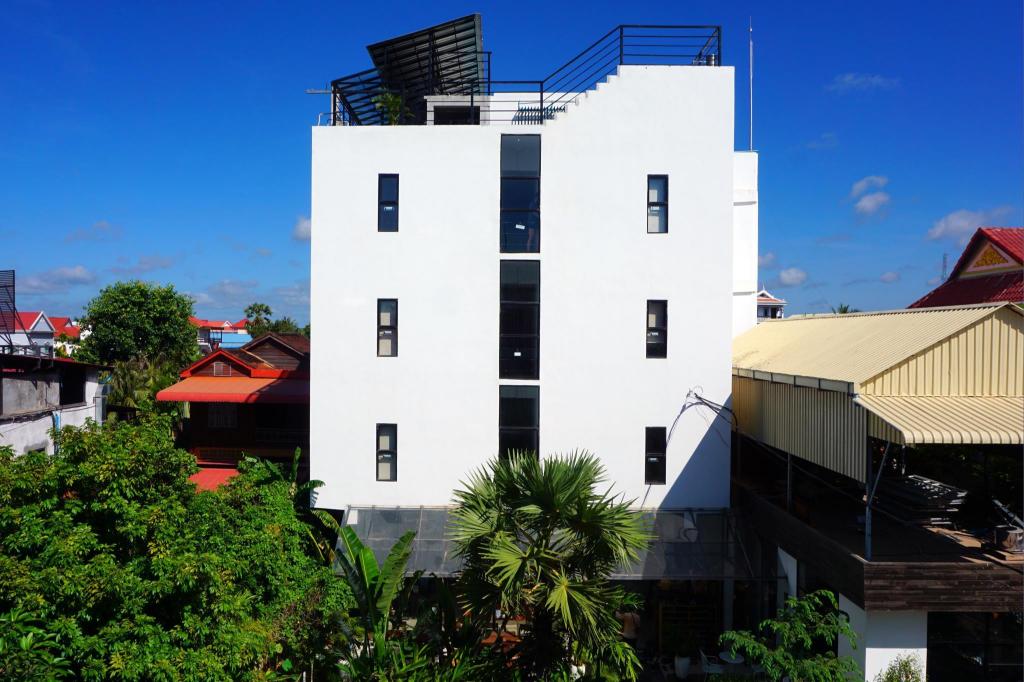 Having been built not too long ago – in 2017 to be exact – Oops Hotel boasts brand-new facilities, clean rooms, and neat interiors. It reminds us of these cozy accommodations in Bali. But aside from cleanliness, this cheap hotel near Pub Street Siem Reap has been lauded for its excellent location. It’s only 110 meters from Pub Street.

This hotel is part of our list of “boutique hotels near Pub Street.”

Dedicated to the backpacker who’d like to interact with those budget traveling in Southeast Asia, Snooze Capsule offers affordable capsules in mixed dormitory rooms. The hotel knows how to use good lighting. Look. 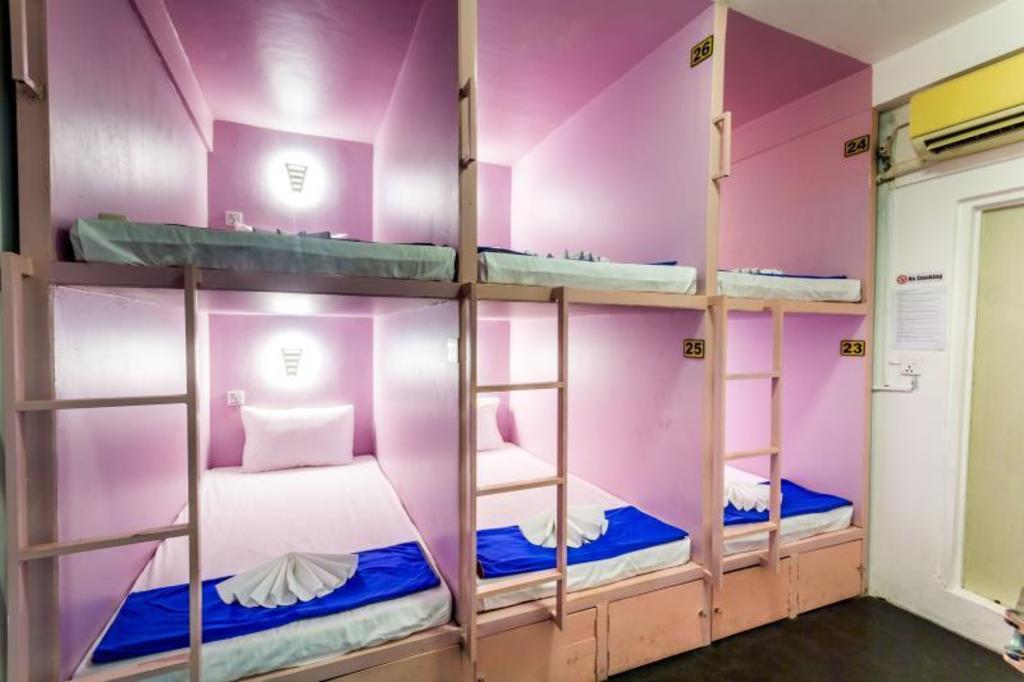 Siem Reap Pub Hostel caters to young travelers who would like to have fun during their trip to the country. It features a pool where one can hang out and socialize with other travelers.